Hemp vs. Marijuana What’s the Difference 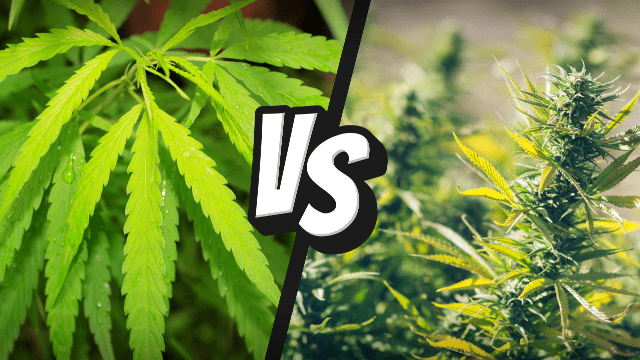 “Hemp/industrial hemp” and “marijuana” are two distinct varieties of the same plant species. “Hemp” is a fiber crop. “Marijuana” is a drug crop. However, these definitions have become confused in the last 60 years. Recently, a movement has begun to distinguish the terms again. It is important to understand the history of usage of these terms in order to eliminate the confusion. Both Hemp and Marijuana are the same plant, but have different uses and effects.  In this article we will discuss the historical difference between Hemp and Marijuana and how it impacts the supplement industry.

The word “hemp” has been in the English language for over 800 years. The word “marijuana” is only 100 years old.

From the first settling of North America until the 1930s, “hemp” was the most common term for Cannabis sativa fiber crops. “Marijuana” was never used to describe hemp fiber crops, which were grown for canvas, rope, fuel oil, and paper. “Hemp” fiber crops were historically low THC and completely non-psychoactive.

In the 1930s, the psychoactive (high-THC) variety of cannabis sativa, imported from Mexico, became common in the southern U.S. It was called “marijuana”, a word popularized through the “Reefer Madness” campaign, to distinguish it from the “hemp” fiber crops (which no one ever smoked).

In 1937, the passage of the Marijuana tax Act hopelessly confused the terms “hemp” and “marijuana”. For the first time, Congress defined these distinct varieties of Cannabis sativa as being the same. What had been commonly known as “hemp” was now “marijuana”.

In 1957, the last “hemp” fiber crop was harvested in the U.S. Because low-THC Cannabis sativa fiber crops were now extinct, the word “hemp” dropped out of use and was forgotten.

In the 1960s, the psychoactive variety of cannabis sativa (“marijuana”) became popular among the counter-culture. The movement to legalize “marijuana” in the 1960s and 1970s did not use the term “hemp” to describe “marijuana”.

In 1985, the word “hemp” re-surfaced in the book The Emperor Wears No Clothes by Jack Herer. This book uncovered information that had been lost for almost 40 years about “hemp’s” historical uses as a fiber crop. The book also touted “hemp” as a solution to modern environmental problems.

Because The Emperor was targeted at a “marijuana” movement and since it was not widely known that low-THC varieties of hemp existed in Europe and Asia, it was believed that “marijuana” must be legalized to allow industrial uses of “hemp”. And because it was the environmentalists and the counterculture that began promoting hemp as an alternative fiber crop, they were not taken seriously.

In Europe, some countries (like France and Spain) had never stopped producing “hemp”. In 1989, the European Economic Community developed rules to govern “hemp” production that applied to all its member countries. The EEC defined registered seed varieties for low THC “hemp” and methods for testing “hemp” for THC content.

In 1993, England officially recognized the difference between “hemp” and “marijuana”, to make its farmers competitive in the EEC. In 1994, Canada, seeing competition from Europe, allowed “hemp” production.

In November of 1994, the Governor of Kentucky, seeing competition from Canada and Europe, appointed a Task Force to study the commercial possibilities of “hemp” in his state.

For the first time, farmers, manufacturers, processors, and agricultural researchers in North America began to take a serious look at “hemp” as an agricultural crop and alternative fiber. As well, the “hemp” environmentalists within the “marijuana” movement see that registered seed varieties exist to distinguish “hemp” from “marijuana”.

This diverse coalition begins using the word “industrial hemp” (or simply “hemp”) to refer exclusively to low-THC non-psychoactive varieties of Cannabis sativa. The goal of the “industrial hemp” movement is to allow legitimate production of “hemp” fiber crops and to explore the environmental benefits of “hemp” as an alternative fiber, pulp, and oil source.

In January 1995, Senator Lloyd Casey (D-Northglenn), made Colorado the first state to attempt to define “hemp/industrial hemp” as distinct form “marijuana” when he introduced the Hemp Production Act. Unfortunately, this bill was killed in Committee due to objections from the federal Drug Enforcement Administration.

In October 1995, the steering committee of the North American Industrial Hemp Council made “industrial hemp” an entirely distinct issue, separate from the legalization of “marijuana”.

25 of 53 state hemp-related bills introduced since 1995 have passed and overall, 14 states have successfully passed hemp-related legislation. In 2002, hemp bills were introduced in seven states: Arizona, California, Hawaii, New Mexico, Vermont, Wisconsin and West Virginia. The CA, HI and WV bills have passed, the NM and VT bills have died in committee, and the AZ and WI bills have been held until 2003.

As of 2021, the stigma associated with marijuana has been decriminalized in many states. Some states like California, Colorado, and Massachusetts have legalized smoking for recreational use. These states are pioneering the comeback for marijuana consumption in the United States. Other states like New Jersey are following the example. As time passes, restrictions are going to be more relaxed in regards to marijuana as more and more people are becoming aware of its effects.

Hemp on the other hand, is emerging as the new miracle in the health industry. With the emergence of medicinal marijuana dispensaries, patients with severe health conditions like cancer, glaucoma, and anorexia are flocking to dispensaries across the country for the benefits hemp provides. CBD, also known as Cannabidiol, is a chemical in the Cannabis sativa plant and has been the subject of alternative healthcare practices. CBD provides the benefits of Marijuana without the ‘high’ associated with THC.

New technology and research has shown the many benefits that CBD has on the body and supplement brands are jumping on the train to incorporate CBD into their products. From encapsulated CBD sleep formulas to CBD gummies for anxiety, the supplement industry is exploring its next frontier in the CBD market. With sales of CBD skyrocketing in the past three years, this market is looking very promising.

show blocks helper
See All Products
We use cookies on our website to give you the most relevant experience by remembering your preferences and repeat visits. By clicking “Accept All”, you consent to the use of ALL the cookies. However, you may visit "Cookie Settings" to provide a controlled consent.
Cookie SettingsAccept All
Manage consent

This website uses cookies to improve your experience while you navigate through the website. Out of these, the cookies that are categorized as necessary are stored on your browser as they are essential for the working of basic functionalities of the website. We also use third-party cookies that help us analyze and understand how you use this website. These cookies will be stored in your browser only with your consent. You also have the option to opt-out of these cookies. But opting out of some of these cookies may affect your browsing experience.
Necessary Always Enabled
Necessary cookies are absolutely essential for the website to function properly. This category only includes cookies that ensures basic functionalities and security features of the website. These cookies do not store any personal information.
Non-necessary
Any cookies that may not be particularly necessary for the website to function and is used specifically to collect user personal data via analytics, ads, other embedded contents are termed as non-necessary cookies. It is mandatory to procure user consent prior to running these cookies on your website.
SAVE & ACCEPT